Neun September (ノイン・ゼプテンバー Noin Zeputenbā) is one of the 12 Month Demons. He is working with several other demons in order to revive the first Demon Lord, Rchimedes.

Neun, like many other demons, has a very childlike appearance. His eyes are large, round, and dark, with a white star in the corner of his left one. He has smooth, off-white hair that frames his face. He wears a brown teddy bear hat with a cute face on it and large ears.

He has a brown sleeveless turtleneck sweater with a white collar. Its zipper is large and gold. His gloves and boots are similar: short and brown with a white trim.

With his friends, Neun exhibits a very competitive nature, but this comes in a more casually competitive style. With his enemies, however, this competitiveness borderlines arrogance, going as far as to desire the fear of his enemies once.

His accomplishments inflate his arrogance, leading him to become much more prideful than he was before. Such a thing has happened before, and was the case after he got the 2nd Demon Lord, Rchimdes II, under his control. This was what made him arrogant enough to desire the fear of his enemies during his confrontation with Ruki.

He is quite proud of his demonic prowess and the abilities that he has because of it. This pride can be seen when he was taunting Juli after he was beaten by Alba. Specifically saying, "What's wrong, Juli? Losing to a mere human like that! You should just lie down for now!" The first part of said quote indicating that Neun views the demons above the humans.

Neun's first major appearance was in early in volume 2, when he caught a soccer ball that went into the woods that Ruki had gone to get. This initiated a conflict where Neun stated that he would kill Ruki. After Samejima enters the equation and punches Neun in the face because Ruki was in trouble, he unveils his magic, Marionette Doll, and with it uses Rchimedes II to surprise attack Samejima.

This is when Ruki recalls Neun, Dezember, and Elf November's fight with Rchimedes II. Originally when they fought him, Rchimedes II overwhelmed Neun and Dezember, but then Neun ran away. When he came back, Elf was with him, but he had the disguise of Rchimedes II's wife, Honey on. Rchimedes II gets angry because of this and incapacitates Neun, which results in Elf taking control of the fight and beating him. Honey actually shows up and tries to seal them, but they barely escape because of Elf copying Rchimedes II's gate.

After Rudolf gets furious with Neun and activates his magic, which allows him to overpower Neun and turn the odds in his favor. This is when Neun activates Marionette Doll: Auto Mode, making his puppet able to control itself and making it 100 times stronger than it was before. After he does this, Hime-chan shows up, falling from the sky and crushing Neun with her suit of armor. This is when Dezember steps in, saving Neun and managing to get him away from the fight along with Rchimedes II, who is still under Neun's control. They retreat, but not before Neun uses one of Rchimedes II's gates to transport everyone to various locations.

Later, when the Demon Lord, Rchimedes is revivied, Neun and Juli quickly overpower and defeat everyone who was going to stop them. That was, until Alba used Lyman's sword, easily defeating the two of them. Neun is later seen getting beaten up by Honey and Ruki so he'll lose control of Rchimedes II.

In volume 3, Neun and Juli tried to attack the Hero Academy. Neun was overpowered by the Second Years at the academy, and when they entered the first year's classroom that Juli was in, he figured out that Neun was overpowered, and decided to retreat.

In Senyuu+, it is revealed that Neun was largely responsible for recruiting Juli to join him and Dezember in their efforts to revive the first Demon Lord. He recruited Juli based on an agreement, that if Juli were to join them, him and Neun would take turns every other week buying the Weekly Magazi, a magazine that they both really like.

This ability allows Neun to control a being, demon, human, anything goes. There is one condition for the ability, and that is that the vessel that Neun wishes to control must be in a state of near-death for him to be able to control them.

Neun and Juli originally bonded over their shared liking for the weekly Magazi, and have stayed good friends. They are often seen together when Dezember and them are on missions to revive the first Demon Lord.

As his childhood friend, Neun is generally supportive of August, and has said that August is "a friend to everyone."

"Ahaha! What's wrong, Juli? Losing to a mere human like that! You should just lie down for now!" (Chapter 2, Episode 52) 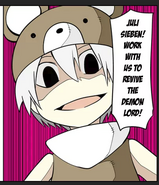