Lym (リン Rin, full name リンピック Rinpikku) is a demon and a student at the Hero Academy. She is Ruki's younger sister. She is a First Year being taught under Foyfoy.

Lym is a young demon with a black beanie, blue eyes and short blond hair. She wears a black jacket with a yellow shirt underneath. Under her beanie she sports the same bat wings on her head that the rest of her family has.

She seems to care deeply for her friends when they are in trouble. She seems to play the role of Tsukkomi to Lake and Salt. She is often called mature for her age.

She is first seen traveling with Lake in search for Salt. During the class trip she is trapped with Lake in a hole in the cave, Alba bursts through with the help of Rchimedes II, it is then revealed she is his daughter and Ruki's sister. Afterwards she is brought back to the

Lym seems to be adept at sensing magical presences.

Her father tends to get Lonely without her around. 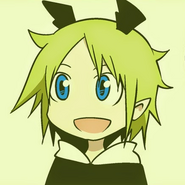 Lym without her beanie.

Lym staring out a window
Community content is available under CC-BY-SA unless otherwise noted.
Advertisement