Haruhara Robinson (春原ロビンソン) is the writer, illustrator, and mangaka of Senyū. He is a rather well-known and prolific creator on Nico Nico Douga. While he does not appear in Senyuu's main story, he often appears in omake segments and volume afterwords. 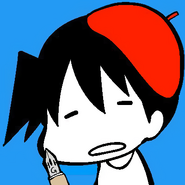